This is organic month! Normally we would be shouting and celebrating this however with the constant shadow of COVID-19 and the financial and health woes of the nation, to some it can seem to be very much a background story.  Now, I am going to hold my hand up and say that we are not organic farmers, but, we are fairly low-input farmers and I’m pretty sure that old Richard Sheppy would have been fairly shocked about the state of our grazing area’s nowadays, with more docks and thistles than he would have been comfortable with his farming friends seeing over the tops of the hedges as they drove by in their Landrovers.

Here, we have one very old orchard which we managed organically, under the strict supervision of the Soil Association, for a good many years and from which we produce our Traditional Organic Cider.  I’ve often heard people suggest that “organic” equals “wild” or “never sprayed”.  In fact this couldn’t be further from the truth; organic crops and livestock are very much managed, but there are strict rules about how and with what applications if they are needed.

The landscape we look at is a completely man-made environment which has been managed for hundreds of years, but since the war, when farmers were encouraged to produce crops ever more intensively and with the aid of chemicals previously unknown to agriculture, we have increasingly moved towards a type of mono-cultural factory arable crop farming which has little room for nature.  I suggest, in fact, that a whole generation of farmers is now sufficiently distanced from the needs and interactions of the plants and wildlife around us, that it is very hard for us to understand quite where to start to change things.

The problem with wildlife is that each generation only knows the wildlife which it sees.  It can still amaze and enchant, but it just isn’t possible to imagine what went before, or what has been lost, if we haven’t actually seen it.  My mother’s family farms on the Blackdowns, which have been transformed from heath and wilderness over the last century by the plough, so that the loss of floral diversity in her lifetime has actually been shocking.  Close to the family farm there was one little paddock which had been overlooked into the 1970s when I knew it.  It must have been managed at that time as it had been for hundreds of years, and I will never, ever forget it.  It was quite magical and illustrates to me what we have lost.  There were so many different plants and wild grasses that it was mesmerising; there were cuckoo flowers (single and double), cowslips, several orchids, moon daisies (ox eye daisy), hard heads (knapweeds), primroses and many more; most of us have never been lucky enough to see this kind of ancient meadow.  You couldn’t step for standing on something, and this was the kind of bio-diversity my mother grew up with only 80 years ago; just think what insect life this supported and that, in turn, birds.

We’re not all fully invested in organic gardening, farming or horticulture, but there is so much that needs to be done and which I am sure can be done if we can only try to be a little less tidy.  Under financial pressure the Councils are not now cutting verges like they used to, thank goodness.  Every little helps; it’s amazing what comes up to flower in the lawn if it’s not cut, or, by leaving some of the garden tidying until the Spring, we leave seeds and shelter and by not cutting back the hedges when they are full of Autumn fruits we preserve nature’s larder.  We are lucky enough to have a very diverse environment here at the farm, but there is much more we could to do and I really hope that we will make a difference on our small patch before we leave it to the custodians of the future. 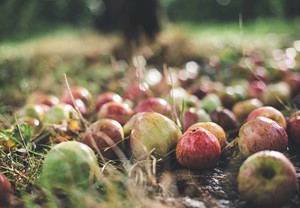 Cider of the Month: Organic Cider

Cider of the Month: Organic Cider 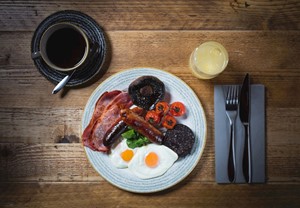 What a way to start the day.